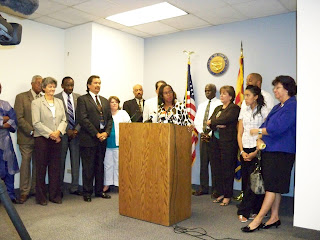 Democratic legislators joined by community leaders held a press conference this morning at the Senate in opposition to SB 1069, a bill to ban ethnic studies in public schools pushed by Superintendent of Schools Tom Horne.

Democratic members are against this ban because students should be able to learn about different cultures in schools. Democrats also stated that they believe that school districts should be the ones making curriculum decisions and not the state.

Sen. Landrum Taylor read off this list of topics she is concerned could be removed from the school curriculum.

- Slavery.
- The exploration and settling of the American West, Southwest and related activities with regard to Native American tribes.
- Women’s suffrage.
- The history of immigrants in the United States prior to 1915.
- Major military conflicts in the history of the United States, including the American Revolution, - The French and Indian War, The War Between The States, The Mexican-American War, World War I, World War II, The Vietnam Conflict, and any military activities in the Middle East.
- The civil rights movement.