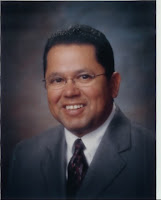 STATE CAPITOL, Phoenix – Sen. Richard Miranda (D-Phoenix) will be a speaker at the 27th Annual National Association for Latino Elected Officials (NALEO) Conference during the National Leadership Luncheon on Saturday, June 26 in Denver.

“This is a great opportunity to speak with my fellow Latino elected officials on the divisive immigration bills passed by the Arizona Legislature, SB 1070 and amendments by HB 2162,” said Sen. Richard Miranda. “We need to focus on how to stop anti-immigrant and anti-civil rights legislation from making it through our statehouses.”

“We need real reform. SB 1070 is nothing, but mean-spirited legislation that will lead to racial profiling, break established community relations with police and come at the cost of the civil rights of American citizens,” said Miranda.

Miranda is also the Co-Chair of the Arizona Legislative Latino Caucus.

Founded in 1976, NALEO is a non-partisan association of more than 6,000 Latino officials in the United States. NALEO is on the Internet at: http://www.naleo.org/
Posted by Arizona Senate Democrats at 10:17 AM