Senator Alvarez Awarded by League of Arizona Cities and Towns 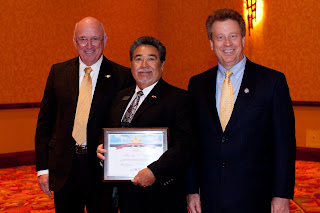 STATE CAPITOL, Phoenix – Senator Manny Alvarez (D-Elfrida) was recognized by the League of Arizona Cities and Towns during the League’s 2010 Annual Conference Legislative Luncheon held on August 26 in Glendale, Ariz.

Sen. Alvarez received a “Friend of Cities and Towns Award” for legislators playing a vital role in defending and supporting local governments.

“Cities and towns are a critical part of our state’s infrastructure. It is greatly important to keep open good lines of communication between the state and the cities and towns as we continue to look for ways to rebuild Arizona’s economy during this difficult time,” said Sen. Alvarez. “I look forward to continuing to work with the League in order to best serve Arizonans.”

The League of Arizona Cities and Towns represents the 90 incorporated cities and towns in Arizona at the state legislature.
Posted by Arizona Senate Democrats at 2:21 PM