STATE CAPITOL, Phoenix – The first bill of the session was filed moments ago to restore AHCCCS transplant coverage and save the lives of Arizonans who were denied transplants by Republican budget cuts to health care.

“It has been over two months since Republican cuts to transplant coverage took effect and people are suffering,” said Schapira. “Instead of fixing the problem which only costs $1.2 million, Gov. Brewer is acting as a one-person death panel, trying to shift the blame from herself to the federal government. She has the resources to restore coverage, but chooses to let people who are dying become more ill each day. This legislation reinstates the transplant coverage, which is clearly not optional for people waiting for a transplant in order to live.”

Today, the Arizona Republic’s Editorial Board called for Brewer to stop holding transplant patients hostage. Democrats in the Legislature agree.

Without a life-saving transplant, patients like Francisco Felix, who desperately needs a new liver, will only have months to live, and Tiffany Tate will have to breathe with only 25 percent of her lung capacity. More patients are coming forward each day asking for a chance to live. There are 97 patients who are depending on Brewer and legislative Republicans to join Democratic lawmakers and make the right decision to restore coverage.

The legislation is Senate Bill 1001. The legislative session begins January 10, but Senate Democrats are hopeful the issue will be dealt with earlier.

The legislation is posted here:
http://www.azleg.gov/FormatDocument.asp?inDoc=/legtext/50leg/1r/bills/sb1001p.htm
Posted by Arizona Senate Democrats at 3:07 PM No comments: 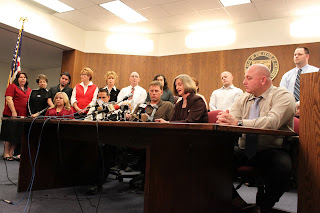 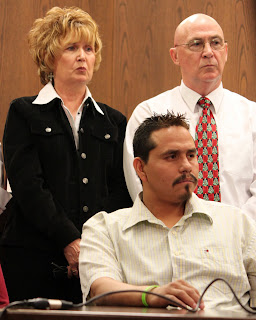 “At this point, Jan Brewer is a one-person death panel,” said incoming Senate Democratic Leader David Schapira. “Brewer describes these transplants that she chose to ‘discard’ as ‘optional.’ A transplant isn’t an option for someone who is fighting for their life under Brewercare.”

Brewer’s office lied by blaming the new federal health care law for their own state cuts to transplants — Republicans voted to cut transplants before the federal law passed.

Democrats are urging Brewer to use federal stimulus dollars or call a special session immediately to save the $1.4 million transplant program. According to state economists, Brewer has $30 million in discretionary stimulus funds. She recently used $2 million on an algae program and $20 million to fix the roof of the Coliseum.

According to state economists, Brewer claims she has used the $30 million, but has not disclosed where she spent the money. She also has not disclosed that information to the public and has not responded to lawmakers’ and reporters’ public records requests to uncover how she spent Arizona’s money.

“People’s lives are at stake,” said Rep. Anna Tovar, D-Tolleson (District 13), a two-time transplant recipient. “I know that these families and their loved ones are fighting for their lives. As a transplant survivor, I know the difficult times they face. It’s time to hold Republicans accountable for wrong choices they made before another Arizonan dies.”

Dr. Maryl R. Johnson, president of the American Society of Transplantation and medical director of heart failure and transplantation at the University of Wisconsin Hospital and Clinics, stood with transplant patients Randy Shepherd, Francisco Felix, Tiffany Tate, Douglas Gravagna and their families, as well as the family of Mark Price to call for action.

"The American Society of Transplantation is grateful for the ongoing dialogue and interaction with Arizona state leaders on this critical life and death issue,” Johnson said. “This is not a partisan issue. We have had positive conversations with leaders from both political parties as well as the governor's office. That said, an immediate solution must be identified before any Arizonans die awaiting life-saving donor organs. The real life repercussions of the Medicaid cuts we are discussing today will not simply reduce an individual's quality of life, rather they will determine whether or not an individual lives or dies. The modest savings achieved through these coverage cuts are not worth the loss of human life."
Photo: Senate Staff: (l to r seated): Tiffany Tate, Francisco Felix, Randy Shepard, Dr. Maryl R. Johnson, Douglas Gravagna, (back row far left) Shelly Gerhart (mother of Mark Price who recently passed away)
Second photo: Francisco Felix, Lois and Bob Tate
Posted by Arizona Senate Democrats at 3:32 PM No comments: