Death Resolution read for Lloyd Oliver, one of the original Navajo Code Talkers

Today, Sen. Jack Jackson Jr. read Senate Resolution 1013 in honor of Lloyd Oliver, one of the original Navajo Code Talkers. Mr. Oliver's granddaughters Cecilia and Danielle Oliver were present at the Senate for the reading. 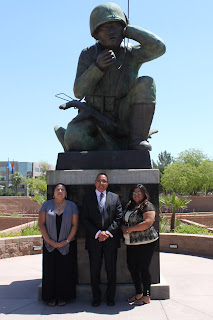 Lloyd Oliver, one of the original Navajo Code Talkers, died on March 16, 2011 at the age of eighty-eight.

Lloyd Oliver was born in Shiprock, New Mexico on April 23, 1923 into Bit'ahnii (Folded Arms Clan), born for Kinlichíi'nii (Red House Clan). His chei was Naakaii Dine'é (Mexican People Clan) and his nálí was Tódích'íi'nii (Bitter Water Clan). He graduated from Shiprock Agricultural High School in 1941 and enlisted in the United States Marines a year later at the age of nineteen. He became one of the first of the original group of twenty-nine men who became known as the Navajo Code Talkers, an elite group of Native American men who used their knowledge of the unique Navajo language to create an unbreakable military code during World War II. Lloyd Oliver served his country with distinction as a code talker, scout and sniper, and in 1945, he was discharged from the Marines with the rank of corporal.

Lloyd Oliver eventually moved to Phoenix where he learned silver and metal smithing and went on to become a successful jewelry maker. He continued making and selling his distinctive designs until he was well into his seventies.

Industrious, kind and humble in all of his endeavors, Lloyd Oliver will be greatly missed by his wife, Lucille, five children, six stepchildren, nineteen grandchildren and twenty-five great-grandchildren.

Be it resolved by the Senate of the State of Arizona:

That the Members of the Senate express regret at the passing of Lloyd Oliver and extend their deepest condolences to his surviving family members.
http://www.azleg.gov//FormatDocument.asp?inDoc=/legtext/50leg/1r/bills/sr1013s.htm&Session_ID=102
Posted by Arizona Senate Democrats at 12:06 PM