Gone. And it's not coming back anytime soon. Legislators spent the week hearing from panels of economists, business leaders, county officials and its own budget analysts, and all of them said essentially the same thing: This year is going to hurt, and the recovery will be slow.

On Monday, University of Arizona economist Marshall Vest told the Finance Advisory Committee "clearly this is the worst recession in Arizona history, or at least since World War II."

The Joint Legislative Budget Committee revealed in presentations that the state faces a shortfall of $1.6 billion (yes, with a "b") in the current fiscal year ending June 30, as well as an additional $3.0 billion shortfall in the coming fiscal year, which begins July 1. Moreover, revenue is not projected to return to the same level that it was two years ago until after June 30, 2012.

There is some silver lining, however. Economists predict that the precipitous economic decline that occurred at the end of 2008 is not likely to repeat, and that each subsequent year will be, if not fantastic, at least better than the previous. We appear to have taken the barrel ride over the economic falls. Now we have to fix it. But how?

Necessary reforms are often born of crisis and this is most certainly a crisis. Conservatives in the legislature will push to cut government to the bone and blame our current situation on "excesses" of the Napolitano administration. The truth is much more complicated. The largesse that the state enjoyed just three years ago was mostly the result of large upticks in volatile income tax categories, along with very strong sales tax returns. The state depends overwhelmingly on sales tax revenue. In fact, it made up 50 percent of the state's revenue in fiscal year 2008. As such, when consumer spending suffers, so does the state.

This presents an opportunity to examine our current tax structure and see if there's not a way to more equally balance the sources of revenue so that the state is not doubly pummeled in difficult economic times. Indeed, much of this work has already been done, but was not actively pursued. After all, government is where many people look for assistance when they fall on hard times. It has to be there for them. It is, in essence, what people pay their taxes for to begin with.

Below, you will see a graphic with data provided by JLBC during a joint House and Senate Caucus. These are not "savings options" like they were presented, but cuts to vital programs in education and healthcare.

Democrats are ready to be part of the solution to this particular budget crisis, but are also ready to stand up for Arizona's families and vulnerable populations in the process. More importantly, there must be an emphasis on the future and the creation of a more economically sustainable Arizona.

Thank you for your readership and we hope that you will pass this along. 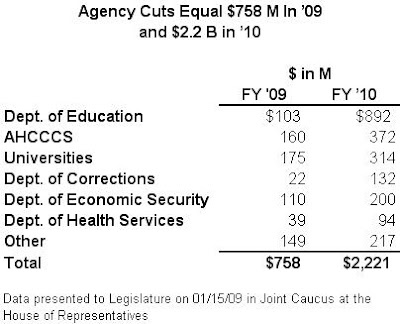