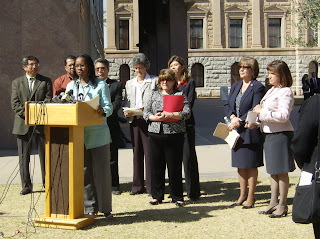 STATE CAPITOL, Phoenix – Senate Democrats announced budget strategies for Fiscal Year 2010 in response to the need for other strategies aside from draconian cuts and tax increases.

“We have heard from numerous constituents at the budget hearings we held around the state and from those who have come to the Capitol by the thousands,” said Sen. Jorge Luis Garcia. “The clear message is that they want to know other strategies aside from more draconian cuts and tax increases.”

During the 11:30 press conference today, Democratic Senators gave testimony on how this budget has affected people, healthcare, K-12 education and higher education.

“The FY ’09 budget didn’t need to happen this way,” said Sen. Garcia. “There were other strategies and we have shown some of those today.”

To date, nearly a thousand people have been laid off and tens of thousands have been furloughed. Senate Democrats are maintaining a counter on their blog at http://www.azsenatedemocrats.com/ of how many people have been affected by the FY ’09 budget passed by the majority in the middle of the night to meet a fabricated deadline.