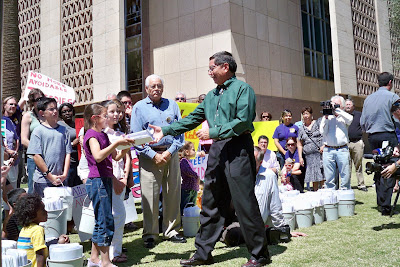 Today, a group of children and Child Protective Services workers delivered 16,000 letters to the Capitol regarding CPS cuts. The letters call on members to restore the CPS cuts and explain potential impacts of the cuts.

From the Senate, Sen. Jorge Luis Garcia, Democratic Minority Leader, accepted a packet of letters and has already started to read them. The group will be delivering letters to the Governor and members of the Senate and the House.

The Republican budget fix approved in January caused layoffs of 112 CPS workers of the estimated 1,344 people laid off and the additional 27,865 people furloughed.

Here is a link to SEIU's coverage of the press conference, which includes several more pictures.
Posted by Arizona Senate Democrats at 12:25 PM