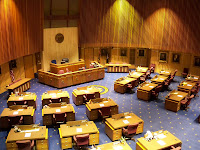 The Senate adjourned at 4:07 a.m. after passing the Republican budget on a party line vote. Senate Democrats waited all day long for the Republican Majority to decide whether the Senate would come to the floor (and waiting for them to obtain the 16th vote to pass the budget proposal).

At approximately 11:45 p.m., Senate Democratic Leader Jorge Luis Garcia went to the Senate President and told him that Senate Democrats would be leaving at midnight. A caucus bell did not ring until after midnight. Not all 16 Republican members who would vote yes on the budget were even in the Senate building until after 1 a.m.
At 3 a.m. when the Senate finally came to the floor, Sen. Burton Cahill offered 11 amendments to the Republican budget (out of 29 prepared in the interest of time).
The House is currently in Committee of the Whole hearing the Republican budget proposal.
The Senate will begin hearing bills next week. No agendas are posted yet, but we anticipate the Natural Resources, Infrastructure and Public Debt committee and the Judiciary committee to meet and hear bills on Monday.
The full list of the Senate Democratic Amendments that were prepared for the budget are listed below:
S.B. 1188 -- Feed Bill
Aboud Floor Amendment #4: Restores $931,000 to the Greater Arizona Development Authority in the Department of Commerce for rural communities.

Garcia Floor Amendment #1: Sweeps $3 million from the House balance to fund the Commission on Indian Affairs. Reverts the balance to the General Fund.

Garcia Floor Amendment #2: Requires that one-half of the monies generated by the semi-annual fee of $0.50 per vehicle insured under a motor vehicle liability insurance policy shall be transferred to the newborn screening program fund.

Burton-Cahill Amendment: Restores the lump sum reduction of $1.6 million to the Arizona Commission on the Arts.

Landrum-Taylor Amendment: Restores funding in the amount of $125,000 to the African-American Commission in the Arizona Department of Administration.

Cheuvront Floor Amendment: Broaden the base and lower TPT rate to 3.4%