STATE CAPITOL, Phoenix – A survivor of the Virginia Tech massacre, Sen. Steve Gallardo, the Brady Campaign and Arizonans for Gun Safety will host a tour promoting gun safety and speaking against legislation to allow guns on higher education campuses.


Each event will feature Colin Goddard, a survivor of the April 16, 2007 Virginia Tech massacre that left 32 dead and 17 injured, and a screening of Living for 32, a 45-minute documentary recounting the tragic events and Goddard’s courageous journey of renewal and hope.

The Brady Campaign is the nation's largest, non-partisan, grassroots organization leading the fight to prevent gun violence. The Brady Campaign, working with its dedicated network of Million Mom March Chapters, is devoted to creating an America free from gun violence, where all Americans are safe at home, at school, at work, and in our communities.

Arizonans for Gun Safety (AzGS) is a non-profit organization dedicated to reducing gun deaths and injuries in Arizona. AzGS is partnering with the Brady Campaign on the Living for 32 events.
Posted by Arizona Senate Democrats at 12:08 PM No comments:

STATE CAPITOL, Phoenix – Today, the Arizona Senate Committee of the Whole (COW) will consider a bill to create a legislative committee to decide which federal laws to nullify. The COW is an opportunity for legislators to offer amendments before giving a final Senate vote to a bill.


The following statement is from Senate Minority Whip Paula Aboud:

“This majority party legislature is trying to form a Legislative Committee on Nullification of Federal Law. The intent is to separate from the Federal government in as many ways as they can without concern for the constitutionality of the attempts. It has been so darn frustrating watching fringe legislators trying to dismantle our state and to tarnish our state’s reputation.”

“The business and tourism industries have begged Republicans to stop running polarizing bills and to please give the state a rest from the “outrageous” reputation being projected by polarizing legislation.”
“Two nights ago, in Appropriations Committee, the business and tourism community was ridiculed for opposing the next onslaught of immigration legislation being promoted by Senators Ron Gould and Russell Pearce. Those organizations represent the businesses that will help lead Arizona out of this recession. For the sake of our economic recovery, for the business community and our unemployed citizens who are suffering because of the extreme bills being proposed, enough is enough!”

“Today, I am offering an amendment to SB 1433 to propose that Pima County secede from the rest of the State. We do not advocate their brand on our state and we don't support their harmful legislation that continues to tarnish Arizona’s reputation.”

“Please know that, in our hearts, we Democratic Legislators from Southern Arizona would love to separate ourselves from this fringe element. This amendment won't pass, but the intent is to announce that enough is enough!”

“It’s time to stop the madness and to bring dignity back to our wonderful state.”
Posted by Arizona Senate Democrats at 3:43 PM No comments:

STATE CAPITOL, Phoenix – Sen. Steve Gallardo responded to the effort by Senators Steve Pierce and Scott Bundgaard to pass SCR 1025, a deceptive ballot referendum that could result in voters unwittingly repealing Clean Elections. The measure does not mention Clean Elections.


“SCR 1025 is completely dishonest,” said Sen. Steve Gallardo. “Backers of this measure are afraid to debate Clean Elections on its merits because they know voters overwhelmingly support the popular program. Instead they are hoping to deceive voters into killing the Clean Elections by defunding it and that’s shameful.”

SCR 1025 would effectively end Clean Elections in Arizona by constitutionally barring the use of “public funds” for candidate campaigns. In order to achieve this, the amendment slated for the 2012 ballot redefines “public funds” to include the 10 percent surcharge on lawbreakers that comprises the Citizens Clean Elections Fund.

“If they want to repeal Clean Elections, why not be honest about it?,” said Gallardo. “Voters have made it clear that they are sick and tired of sneaky and deceptive ballot measures. These legislators keep proving that they are out-of-touch with voters.”

Senator Jack Jackson, Jr. stands up for cities and towns

STATE CAPITOL, Phoenix – A bill to freeze urban revenue sharing at the 2010 level for the next twenty years was held by the Senate Finance Committee Thursday.


“The Urban Revenue Sharing Program helps cities fund vital services,” said Sen. Jack Jackson, Jr. “We are all facing tough times, but it is irresponsible for the state to balance the state budget by shifting the burden to cities. I was ready to vote ‘no’ for this bill in committee and I am thankful this bill was held.”

Currently, incorporated cities and towns receive 15 percent of net income tax collections. SB 1221 would have required the rate to be frozen until fiscal year 2029-2030 with the excess amount to be used to pay lease-purchase and leaseback agreements.

“The City of Flagstaff is extremely appreciative of Senator Jackson’s efforts to protect the financial security of Arizona cities and towns, today and in the future,” said Flagstaff Mayor Sara Presler. “Senator Jackson is an advocate for the people of Arizona and recognizes that balancing the State budget on the backs of local services such as public safety is not a sound strategy.”
Posted by Arizona Senate Democrats at 2:15 PM No comments:

“I stand by my commitment to veterans and will continue to work to address their concerns,” said Sen. Jack Jackson, Jr. “It is my honor to serve on this committee and I am thankful for the support from legislative members on measures that will help honor our brave veterans.”

SB 1266 establishes veteran supportive campuses in Arizona postsecondary institutions. Supportive campuses are those that have faculty and classroom settings that are available to returning veterans that makes returning to civilian and college life more comfortable and in turn increasing the college retention rate of veterans. It is anticipated that one of the first pilot programs will take place at Diné College.

“We want every Arizona college, university and career college to provide the most supportive and welcoming campus possible for these student veterans,” said Gene van de Bosch of the Arizona Veteran’s Education Foundation. “As a great many of our nation’s veterans are from Native American communities, such as the Navajo Nation, we want one of the early adopter pilot projects for the Arizona Veteran Supportive Campus Initiative to be Diné College located in the Navajo Nation. We will be meeting with Diné College officials on February 21 to discuss how we can work together to help all of our student veterans – including veterans from the Navajo Nation.”

This is the second measure sponsored by Sen. Jackson, Jr. supporting veterans. SCR 1009 honoring Hopi code talkers unanimously passed out of the Senate on February 2.

“Linda McNulty is an exceptionally well qualified candidate, and Arizonans will be well-served by her appointment to the Arizona Independent Redistricting Commission,” said Schapira. “We were fortunate to have many great candidates from which to choose. Linda has a sharp legal mind, has traveled throughout Arizona and will dedicate herself to creating Congressional and Legislative districts that both give voters a choice in general elections and protect communities of interest.”

McNulty, a Tucson resident and partner at the law firm of Lewis and Roca, earned a B.S. in Nursing from the University of Rochester and a J.D. from the University of Arizona. McNulty has been practicing law for nearly 25 years and focuses her work in the areas of real estate, financing, business transactions and natural resources law.

McNulty serves her community as the Director of the Pima County Sports and Tourism Authority, the President-elect of the Tucson Chapter of Commercial Real Estate Women and as a member of the Board of Directors of the Arizona Center for Law in the Public Interest.
Posted by Arizona Senate Democrats at 2:00 PM No comments:

Justice for Brisenia and Raul Flores

STATE CAPITOL, Phoenix – Today, an Arizona jury found the leader of an anti-immigrant group guilty of two counts of first-degree murder for the deaths of 9-year-old Brisenia Flores and her 29-year-old father Raul Flores who were murdered on May 30, 2009 in a home-invasion in Arivaca, Ariz.

“Justice was served for Raul and young Brisenia Flores who were taken from their family by this senseless act of violence,” said Sen. Steve Gallardo. “Their deaths cannot be taken in vain, but as a constant reminder that we must rise up against hatred and violence. It is a call for us as a society to keep our discourse civil.”

It was testified that Shawna Forde, the leader of Minuteman American Defense, planned the attacks to fund anti-immigrant activities.
Posted by Arizona Senate Democrats at 5:29 PM No comments:

Children's rights and the affirmation of the 14th Amendment

The Arizona Legislative Latino Caucus today spoke in favor of children’s rights and the affirmation of the 14th Amendment. They are joined by e-Latina Voices represented by Olga Aros and Jerri Pastor. 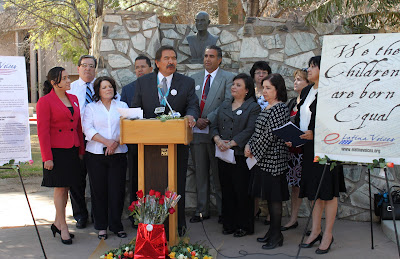 Posted by Arizona Senate Democrats at 3:10 PM No comments: 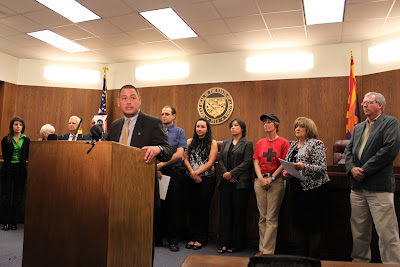 ﻿
Posted by Arizona Senate Democrats at 3:08 PM No comments:

Democratic lawmakers invite the public to meet and talk with them at a statewide “Office Hours” event this weekend. Democratic legislators will host “Office Hours” in their districts to meet their constituents, address their concerns and answer questions. The event leads up to Statehood Day on Feb. 14.


“This is incredibly important that we continue to have open discussions and do our job as state representatives and senators,” said Rep. Ruben Gallego, D-Phoenix (District 16), who pioneered the event. “I think we can keep Congresswoman Giffords in our hearts by standing up for democracy. We want to hear from our constituents so we can take their concerns to the capitol.”
Office Hours will occur at the following locations:

STATE CAPITOL, – Senate Bills 1308 and 1309, bills to define citizenship and create a legal challenge to the 14th Amendment failed to advance in the Senate Judiciary Committee today.
“These bills do nothing to move Arizona forward,” said Senate Minority Leader David Schapira. “The legislature should be focusing on issues that are important to Arizona citizens, such as getting our economy back on track and getting our fiscal house in order.”
The Senate Judiciary Committee took testimony for three hours before the committee chairman ultimately held the bills. Sen. Kyrsten Sinema and Sen. Steve Gallardo are the two Democratic members who serve on the Judiciary Committee.
“Today, and have shown bipartisan opposition to this legislation,” Sen. said. “It is unconstitutional and irrelevant to the issues facing our nation. Today's committee hearings in both Arizona and South Dakota demonstrated that these bills are extremist measures that do nothing to solve the real problems we face. We need to get back to work on creating Arizona jobs and repairing our schools.”
In June 2010, a Pew survey showed a majority of Americans opposed ending birthright citizenship by a 56-41 margin. Pew reports that this remains virtually unchanged from a similar survey in 2006.
“I am glad to see that there are members in the Legislature who are willing to stand up for the average Arizonan,” said Sen. . “It is time to put ’s economic recovery back on the forefront where it belongs.”
Posted by Arizona Senate Democrats at 8:18 PM No comments: