“Our plan will put nearly $4 billion into public schools over the next 10 years, protects the long-term health of the state land trust fund, and puts dollars in the classroom now,” House Democratic Leader Eric Meyer, D-Paradise Valley (District 28), said.

The Democratic plan provides sustainable funding, unlike other proposals that would create a shortfall in funding for future generations. This plan:


Meyer added that concerns are mounting about the governor’s idea to cut into the principal of the state land trust’s permanent fund. Arizona State Treasurer Jeff DeWit recently criticized that proposal, in part because it creates a fiscal cliff in five years and hurts the principal of the fund.  The Joint Legislative Budget Committee estimates a loss of $3.2 billion in value under Ducey’s proposal.

“The plans put forth by Arizona's Republican leaders are not much more than smoke and mirrors,” said Senate Democratic Leader Katie Hobbs, D-Phoenix (District 24). “Our responsible plan puts desperately needed dollars immediately into classrooms without stealing from the state land trust or First Things First, without requiring uncertain voter approval, and without setting up our state to fall off another fiscal cliff. Our kids deserve a sound, sustainable plan to fund our schools.”

Additionally, the plan would freeze the expansion of the corporate school tuition organization tax credit program beginning the 2016-2017 fiscal year to produce an additional $10 million in revenue dedicated to the K-12 budget. This will ensure that funding levels can be maintained. Existing tax credit funds for STO scholarships would not be reduced under the plan.

“Under our plan, Arizona schools will immediately receive desperately needed money without having to wait for an unguaranteed approval by voters,” said Hobbs. “And our plan leaves resources in the general fund to address the critical needs of child safety and higher education. It's a plan that protects our children and honors the state's commitment to their future.”

“Arizona has the resources to fund public education. Our plan shows that. It has always been a matter of making it a priority,” Meyer said. “The Republican leaders in the state so far have offered ideas that jeopardize the future of education funding. We can’t afford to waste time on gimmicks, Arizona needs a sustainable education funding plan now.” 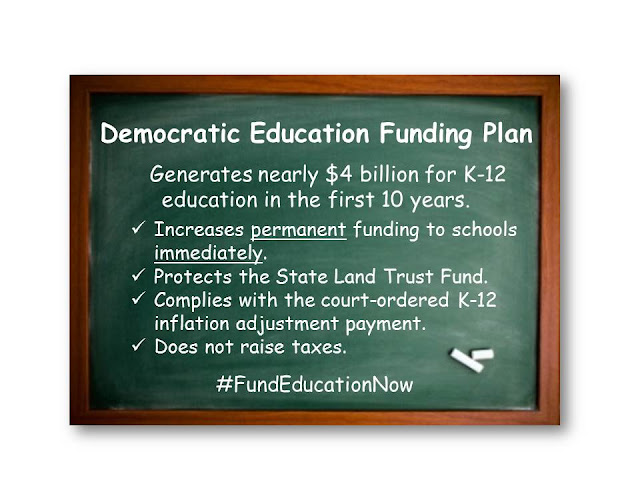 Posted by Arizona Senate Democrats at 9:34 AM